Who are you calling spineless?

Invertebrates, animals with no internal spine, are different than all other animals because they have their skeleton on the outside! This exoskeleton makes them hard on the outside and means they can only grow bigger if they shed their old exoskeleton and grow a new one that's bigger. Some will fascinate you while others will make your skin crawl. Meet Animal Wonders' invertebrate residents.

Chilean Rose Hair Tarantula (Grammostola rosea). Tarantulas are a group of spiders that are usually very large and hairy. Rose hair tarantulas live in the mountains of Chile and they can get up to 5 inches long! These tarantulas are so docile they rarely bite and if they do they only have a very small amount of venom which hardly affects most humans. They eat mostly insects and occasionally small mammals or lizards.
Rose hair Tarantulas have a very neat defense against predators. When the predator gets too close the spider will turn his butt to them and use it's back legs to kick small hairs off it's abdomen. The hairs stick into the predator's sensitive nose and eyes. The tarantula makes his getaway while the predator is rubbing his itching eyes.
Tarantulas don't regrow their kicked off hairs. They have to wait until they shed, or molt, their old exoskeleton to get their new hairs. 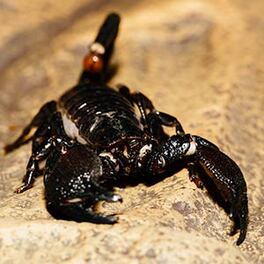 Emperor Scorpion (Pandinus imperator). These scorpions live in the forests of Africa and are one of the largest in the world. They can get up to 8 inches long! They are nearly all black which helps them blend in with old decaying leaves on the forest floor. They eat mostly grubs and insects like termites and crickets. Their claws are impressively large and some have said they can break a pencil in half!
Emperor scorpions are one of the least venomous scorpions. The way to tell if a scorpion is really poisonous is to take a look at his claws. If they're big and scary looking, it's probably less toxic. If the claws are little then it probably has a lot of venom in it's stinger. 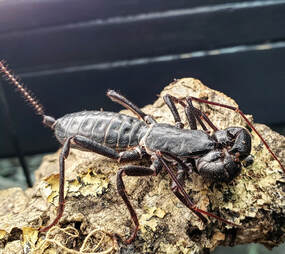 Giant Vinegaroon (​Mastigoproctus giganteus), A lesser known arachnid, these 8 legged arthropods resemble a scorpion but lack the venomous stinger on the end of their abdomen. Instead, as their namesake suggests, they spray a form of vinegar-like acid to deter potential predators from messing with them. Vinegaroons are also predators and use their small but powerful pincers to grab and subdue any prey items, like crickets and beetles, that wander too close. 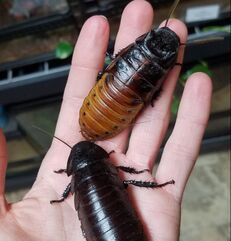 Madagascar Hissing Cockroach (Gromphadorhina portentosa). These cockroaches can grow up to 3 inches long! Fortunately they don't have wings like other cockroach species. They live on the island of Madagascar and are found on the forest floors. They are the garbage men of the forest, eating anything that is organic. They clean up after those rowdy lemurs that run around the tree tops. If there were no cockroaches, Madagascar would be covered in rotting fruit and animal feces. Thankfully these cockroaches take their job very seriously and keep the island clean.
They are called "hissing" cockroaches because if they feel threatened they push air through tiny holes on the sides of their body, called spiracles. The force of air through the holes makes the hissing sound.