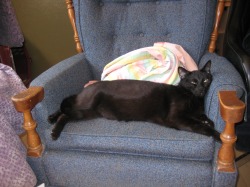 Ambrosius de Jilocasin, Ambros for short, was adopted when he was about 6 months old in Oct. 2005. His mother was a feral cat, trapped, spayed, and released. Ambros had little interaction with humans when he was young but warmed to them quickly. When he was adopted he enjoyed being massaged so much he would fall onto his side and begin to drool whenever he was touched.

It became obvious early on that Ambros was a very intelligent cat. He quickly learned several tricks including, sit, lay down, wave, rise up, circle, into your crate, jump, and kiss. He also quickly picked up on how to open doors, coming and going. Sometimes having a smart cat is a double edged sword.

Ambros is good at making friends. When he was younger he often played chase with Charlie, the dog. Now he loves to chase grasshoppers in the summer, but his favorite activity by far is lounging on his rocking chair.

Meet Ambros in this video!