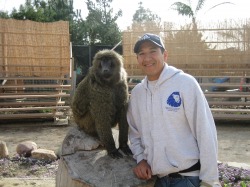 Augusto Castaneda was born in Lima, Peru. His family moved to the United States when he was 6 years old. They lived in Los Angeles, California for several years, had a short stay in Pennsylvania, and finally settled in Santa Barbara, California. Augusto remembers one very special pet he had, a parakeet, that he trained to fly to his finger.

Augusto attended Santa Barbara City College and received an award for outstanding achievement in Zoology. Living so close to the beach, he gravitated toward ocean life and volunteered for the Santa Barbara Sea Center. There he taught the public at the touch tanks about sea life.

He went on to attend UCSB where he obtained a BA in Physical Anthropology. After graduation he learned of the EATM (Exotic Animal Training and Management) program at Moorpark College and decided that was his calling.

During his time at the EATM program, Augusto gained knowledge and experience with caring for and training many species of exotic animals. He also tried out his public speaking skills in presentations to school groups and to the general public. Among the animals he cared for and trained were an olive baboon, harris' hawk, spotted hyena, agouti (S. Amer. rodent), beaver, and turaco.

Upon graduation he was hired at an animal outreach in Pasadena, California. He gained experience with many more exotic species including: squirrel monkeys, servals, porcupines, lynx, bobcats, kinkajous, alligators, and many more. He honed his public speaking skills by giving live animal presentations daily to inner-city school children and found a passion for educating the kids about exotic animals. His favorite memories are of teaching the kids about the animals and having their faces light up with fascination.

In May 2008, Augusto and Jessi Knudsen began the process of creating Animal Wonders Inc. He found that educating the public, especially children, was his calling. Getting the message to low-income schools is his goal and passion at Animal Wonders.