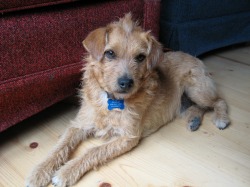 Charlie is a mutt, a mix-breed between a Cairn Terrier and something else. Charlie was found wandering the streets of downtown Los Angeles in early 2007. He frequently visited an elementary school to play with the children. Augusto was giving a presentation at the school when he saw Charlie with the kids on the playground and asked about him. After it was confirmed that he indeed had no home, Augusto rescued him from the streets. He was treated for mange, fleas, ticks, and worms and was then neutered. The vet guessed that he was about 4 months old.

Charlie is an extremely loving dog that only wants to please. He is skiddish around brooms and other types of sticks but with training has started to overcome his fear. He has high energy and loves to play tag, or anything involving running. He has learned many behaviors that he really enjoys to perform. His best friend is Ruby Tuesday  and they love to run and play together.