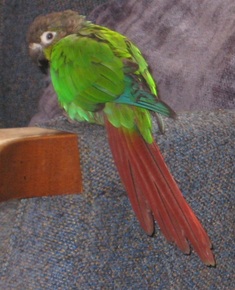 Ginger came to Animal Wonders after she had several homes that did not work out. She has been handled with love and lots of attention which is apparent from her desire to be with humans. She loves to be groomed and grooms back. She is fully flighted and prefers the company of humans versus flying away. She loves everyone and does not have a mean bone in her body.
​
Ginger lost her toe nails when she was very young. Her parents did not know how to care for their babies properly and they over-groomed their babies toes. Ginger finds it hard to hold onto certain perches but has learned to compensate by using her beak to help hold on until she feels secure. It is very important to make sure she has good perches available and she doesn't slip and fall when out and about.
​ 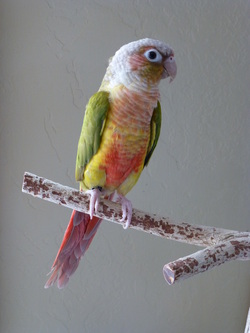 Maui was donated to Animal Wonders from an owner who adored her but the spouse was not a fan of her piercing screams requesting more attention. She arrived and was introduced to several of our younger birds to see how she would do with others. She did great! The next challenge was to find her a permanent companion.

Ginger was an unlikely prospect since she was aggressive to every other bird we had tried to introduce her to. It seems that Ginger must have been waiting for Maui, since they bonded immediately. The two have been inseparable since.

Maui is an incredibly friendly and outgoing bird. She's a perfect ambassador, willingly stepping from finger to finger giving children their first ever experience holding a bird.

Learn more about Maui and Ginger in the videos below!