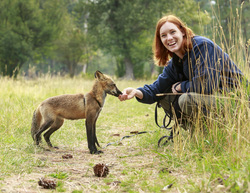 Jessi Knudsen Castañeda grew up just outside of Missoula, MT. She began rescuing animals at a very early age and always wanted to help the ones no one else wanted. When she was 12 years old she knew she wanted to work with animals, so she began volunteering at a local veterinary clinic and animal sitting for friends.

At 17 she moved to California to find her path in life. She had decided she didn't want to be a vet, but was interested in making wildlife documentaries (imagining The African Wild specials on TV) and attended Chapman University for a degree in film production. After 2 years in the world of film she decided that Hollywood wasn't her style and transferred to Moorpark College to attended the EATM (Exotic Animal Training and Management) program at America's Teaching Zoo.

After graduation she was hired to train and cared for the animals at a theme park She gave educational presentations about the animals as well as locally grown farm produce to school groups and the general public. It was here she learned how to entertain while educating. Celery and beets can only hold the attention for so long...

In May 2008, she and husband Augusto Castañeda began the process of creating Animal Wonders Inc. She realized her passion was rescuing animals in need and teaching about the boundless wonders of animals and nature.

Jessi Continues to rescue displaced exotic animals. The animals receive a life-long home at Animal Wonders and become ambassadors for their species by giving live presentations in western Montana as well as being featured on the educational YouTube channel Animal Wonders Montana.