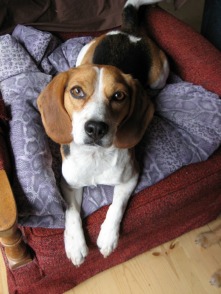 Molly is a pure bred tri-color beagle. She was adopted from a family who found her on the street cornered by 3 larger dogs. She was taken in and brought to the vet immediately. Molly had several bite wounds as well as a harness that was much too small. The harness must have been put on her when she was much younger because her body had outgrown it and had caused wounds where it restricted her growth. The family adopted her out since they already had 3 dogs of their own.

When Molly came to Animal Wonders, she was checked for a micro-chip since she had had a home at some time in her life. No chip was found. She will always wear the reminder of the harness that was too small. Her muscles atrophied behind her elbows leaving her with indentations on her sides. This has not slowed her down a bit.

Molly is a special dog that takes special care and understanding. She came to Animal Wonders with many behavioral issues. She feared most new situations and often resorted to aggression to deal with the situation. She is afraid of new people but will eventually come around with patience and lots of treats. After months of training she has finally overcome her fear of other dogs and will now readily play with them after first introducing herself.

Since Molly is a beagle she loves to smell anything and everything. Molly has learned quite a few tricks since she has joined Animal Wonders' residents. She is highly athletic and many of her tricks include jumping. With steady work Molly will only continue to improve on all her behavior issues.