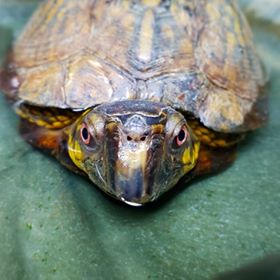 Phoenix came to Animal Wonders in the fall of 2019. The previous owners had him for a total of 35 years but we were told he is 90 years old. When he arrived he was not in great shape. His beak was overgrown, making it difficult to eat, and his shell was malformed from years of malnutrition. In the wild box turtles should be able to close their shell completely and protect themselves, but Phoenix’s does not close.

Phoenix is a little shy but he is settling in well. One of our first goals was to get him eating a proper diet. Although he wasn’t a fan of salads at first, he now happily eats them if we put a mealworm on top. Hopefully, as he settles in, he will gain confidence and maybe one day he will become an ambassador that can educate others on how amazing box turtles are.


Back to Turtles and Tortoises
Back to Reptiles