Birds are wonderful animals to know and understand. See Animal Wonders' bird residents below and learn a little more about these beautiful animals. Click on their pictures to see their biography. 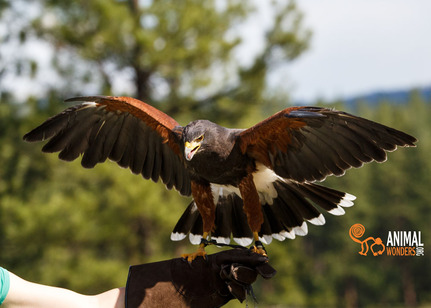 Harris's Hawk (Parabuteo unicintus). You could find a free flying Harris's Hawk in the south western part of the United States all the way south through Mexico to Argentina South America. These raptors can have a wingspan of up to 4 feet and they live in groups, or packs, instead of solitary. They hunt cooperatively and are favored by falconers because of this behavioral trait. Harris's Hawks are intelligent and their eyesight is impressive. Several from the pack will flush the prey from cover while another will swoop down and use their strong talons to stun and grab the prey and then cover, or mantle, the prey with outstretched wings to hide their catch. 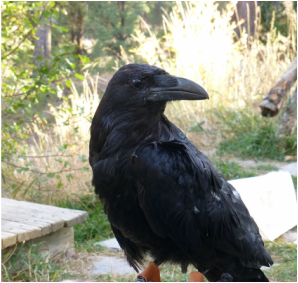 Common Raven (Corvus corax). They can be found throughout the northern hemisphere in North America, Europe, Asia, and Africa. One reason they can live in so many different environments is because they are omnivorous and very opportunistic. Depending on where they live and what is available, they will eat fruits, berries, grains, insects, carrion, small mammals, eggs, and even garbage. Ravens are incredibly intelligent animals. Scientists have documented over 30 distinct vocalizations not including all the sounds they can mimic. Most of these vocalizations are used to communicate socially. They are also one of only a few species of animals, that can point without being taught by humans. Ravens are curious and inquisitive and can even use tools to solve complex problems. They are also very playful and have been documented playing with wolves, otters, and dogs. 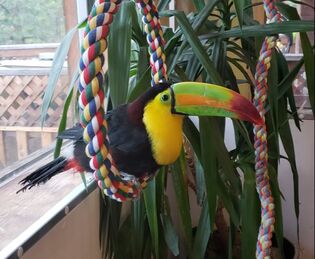 Keel-Billed Toucan (Ramphastos sulfuratus). In the wild keel-billed toucans are found in the jungles from Mexico to Columbia. Their huge bill looks awkward and heavy but it is actually a spongy bone covered in keratin, so it’s lightweight but sturdy. Keel billed toucans are omnivorous and will eat anything from fruits and seeds, to lizards, birds, eggs, or other invertebrates. These toucans are very social animals, rarely seen alone. They are also very smart and have been seen ‘playing catch’ and tossing a fruit with members of their flock.
​ 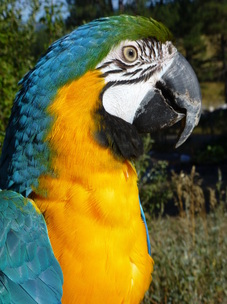 Blue and Gold Macaw (Ara ararauna). These beautiful birds are native to the forests, woodlands, and savannas of South America. Compared to other parrots, macaws have a patch of bare skin on their cheeks. Blue and gold macaws have blue feathers on the top of their wings and torso and golden feathers underneath. They also have lines of tiny black feathers on their faces. The pattern for these feathers is unique to each individual, like fingerprints for humans. Blue and gold macaws have a large beak that allows them to eat nuts, seeds, and fruits. In the wild they will also be seen eating clay. Salt is a very valuable resource and clay is one of the only places it can be found in rainforests.
​ 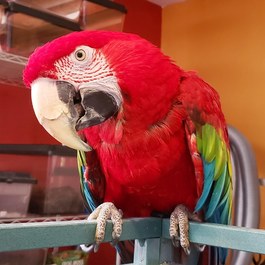 Green Winged Macaw (Ara chloropterus). Green Winged Macaws can be found in the canopy of forests in South America. Compared to other parrots, macaws have a patch of bare skin on their cheeks. Green winged macaws are the second largest species of macaw and they can be distinguished by the green feathers on their upper wing and the tiny red feathers on their face. The pattern for these feathers is unique to each individual, like fingerprints for humans. Green-winged macaws have a large beak that allows them to eat nuts, seeds, and fruits. In the wild they will also be seen eating clay. Salt is a very valuable resource and clay is one of the only places it can be found in rainforests. 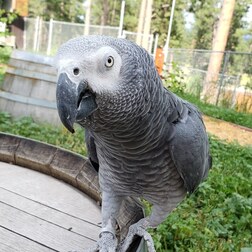 Congo African Grey Parrot (Psittacus erithacus). These unassuming birds are one of the most intelligent animals in the entire world! Found mostly in dense forests in central Africa, grey parrots eat nuts, seeds, fruit, and flowers. They are endangered in the wild due to deforestation and illegal trapping for the pet trade. 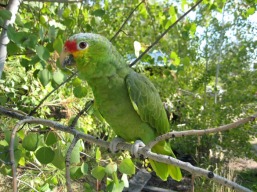 Red Lored Amazon parrot (Amazona autumnalis). These birds are found in the wild in South America. They live in large groups called flocks.  In the wild they eat fruit, vegetables, flowers, seeds and leaves from the trees they love to play in.

Parrots are birds that are known for their ability to "talk" like humans. Many people have a parrots as pets because of their intelligence and beauty. These birds can live 60-80 years old! Sometimes a pet parrot has to be put in the owner's will because they outlive their human!
Parrots have really neat feet. Instead of 5 fingers and toes like us. They have 4 toes, 2 in the front and 2 in the back. This helps them hold onto branches. Their toes are so strong that they can hang upside down by one toe! 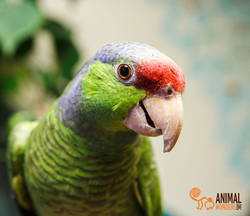 Lilac Crowned Amazon parrot (Amazona finschi). These birds live in South America in humid rainforests. They live in large flocks and eat fruits, flowers, seeds, etc. Parrots can live 60-80 years old! Most parrots have the ability to talk. Some never say a single human word and others say over 100 words!

Like other amazon parrots Lilac crowned Amazons can mimic but are not as outgoing as other species. They are shy but can learn to be confident with a supportive family and lots of practice.
​ 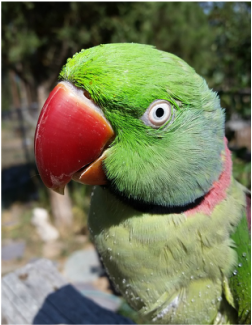 Alexandrine Parakeet (Psittacula eupatria). This is the largest species of parakeet. Parakeet, is in pscittacine family like parrot and essentially it means small parrot with a long tail. These parakeets have extra long tail feathers that can make up more than half of their total length! They are named after Alexander the Great who sent them to nobles as a status symbol to express his gratitude or friendship.


The males and females are sexually dimorphic, meaning that there are physical characteristics that you can see. Males have a black ring around their neck with a bright pink neck band. Females are duller in color without the black ring. Immature males look similar to females, they grow in their black feathers when they mature at around 3 years of age. 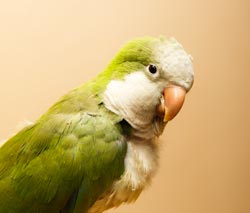 Quaker Parrot or Monk Parakeet (Myiopsitta monachus). Quaker parrots are highly intelligent and social birds native to South America. They are excellent mimics and can develop extensive vocabularies or words, phrases, and sounds. Colonies can even have regional dialects! Also, quaker parrots are the only species of parrot that build nests made of sticks instead of carving holes in trees. Quaker parrots will build huge nests in trees or on structures and have separate ‘apartments’ for each pair. These nests can reach the size of an automobile. In many areas of South America, quaker parrots are considered pests and there are feral populations in many countries around the world, including the United States. 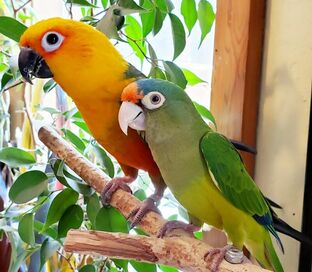 Jenday Conure (Aratinga jandaya) and Halfmoon Conure (Eupsittula canicularis). These brightly colored and boisterous birds are parakeets that live in Central and South America in or on the edges of tropical forests. Jenday Conures are known to be one of the loudest of the conures but they are also one of the most colorful. Halfmoon conures are often the victims of the illegal pet trade. Both species of conures live in flocks of up to 30 and are very social and active, foraging for berries, seeds, nuts, and flowers to eat while keeping a watchful eye out for predators.
​ 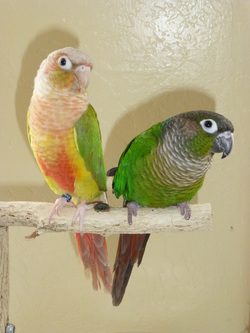 Green Cheek Conure (Pyrrhura molinae). Green cheek conures are found in southern Brazil and northern Argentina in forested areas. They form huge flocks and eat seeds, berries, fruit, and grains. They are one of the smaller conures and are commonly kept as pets. They are known for their loving and curious personality. If well taken care of and given a healthy diet, green cheek conures can live up to 35 years. 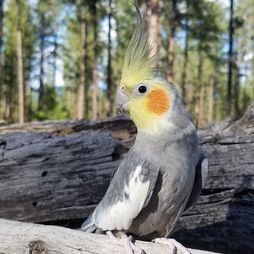 Cockatiel (Nymphicus hollandicus). Cockatiels are native to the scrublands and bushlands of Australia. The earliest European settlers thought they were so beautiful that they later named their genus Nymphicus after mythical nymphs. These colorful little birds are very common as pets. They are spunky, curious, and tend to be very vocal. Cockatiels will copy whistles, words, and phrases. Their most prominent feature is the crest on their heads. Like other birds, cockatiels lack facial muscles and one way they communicate is through the crest feathers on their head. When they are startled it stands straight up, and when they are mad it will lay flat against their head. Also, when cockatiels are afraid or see something they don’t like, they open their mouth and hiss at it. 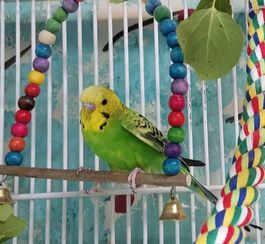 Budgerigar (Melopsittacus undulatus). Budgerigars, or Budgies, are very common as pets. They’ve been bred in captivity since the 1800's and now come in a huge variety of colors. They live in small flocks in Australia but huge flocks are often seen migrating to food and water sources during the drier months. Budgies eat mostly seeds and grasses but will also snack on fruits. These little birds can be spunky and fun and they can mimic sounds, whistles, and words.

Ringneck Dove (Streptopelia risoria). These pigeon like birds are a domesticated breed of dove that is thought to have originated from the wild African Collard Dove. They have been kept as pets for over 2,000 years are are easy going and hardy. They have a distinct ring around the back of their neck and they can come in many different colors. The most common color mutation is albino. The white doves often released during a wedding ceremony are albino ringneck doves. These birds are considered an invasive species so care must be taken if keeping as a pet so that they do not escape and invade environments in which they do not belong. The males make a sweet cooing call and will dance and coo to impress the ladies. 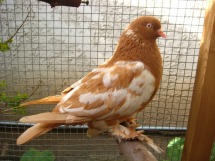 Fancy pigeon (Columba livia). Fancy pigeons are just fancy looking pigeons. They were bred by pigeon breeders to look different just like dogs are bred to look different. There are over 100 different breeds of pigeons and they all came from the rock pigeon from Europe. Some fancy pigeons are bred to have extra feathers on their feet, or tails that look like fans, or have a talent for finding their way home like homing pigeons.
Pigeons eat just about anything they can find but if you keep them as pets they need to have a special pigeon food. People sometimes call them rats with wings because there are so many in cities. These city pigeons are mutts, mixed breeds that flourish around large populations of humans.
Pigeons are monogamous, keeping their mate for life. The parents make a team effort in raising their young. Usually the father takes the night shift sitting on the eggs and the mother takes over for the day.