Most people picture a frog when they hear the word amphibian. There are actually three groups of amphibians: newts and salamanders (urodeles), frogs and toads (anurans), and caecilinas (gymnophiones). Amphibians are interesting animals. They spend a good part of their life in or near water but unlike fish, they breathe with lungs instead of gills. Amphibians have to stay close to water because their eggs need to stay wet to survive. 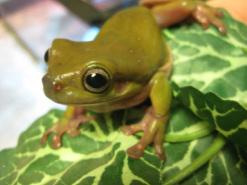 Dumpy Tree Frog or Whites Tree Frog (Litoria caerulea). These friendly frogs are found in Australia and New Guinea in warm tropical environments. They are called "dumpy" because when they are full grown they look rather stout with muscular arms a large belly. Dumpy Tree Frogs can change color; when they are in the light they are a brilliant green and when they are in the shade they turn brown. This helps them camouflage and blend in with their surroundings so they can hide from predators. They lay between 2,000 and 3,000 eggs but only a few survive. The tadpoles hatch out and start to grow legs as their tails start to disappear. Dumpy Tree Frogs like to eat insects like crickets, flies, and beetles. They jump forward and grab them with their mouth. Frogs must close their eyes when they swallow. Their eyelids push their eyes back and their eyes help to push the food down their throat. 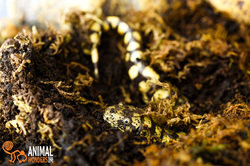 Tiger Salamander (Ambystoma tigirnum). Tiger salamanders are found in populations across North America but they are rarely seen because they are a species of mole salamander. Adults will find or dig burrows up to 5 feet deep in the ground and spend the day down there. Then they venture out at night and gobble up any insects, worms, or small mammals that will fit in their mouths. Most humans don’t notice it, but the yellow stripes on their backs are warning colors. If a predator picks them up, tiger salamanders will bend their tail and excrete a milky poison that tastes and smells terrible. If the predator swallows the poison it will also make them very sick. 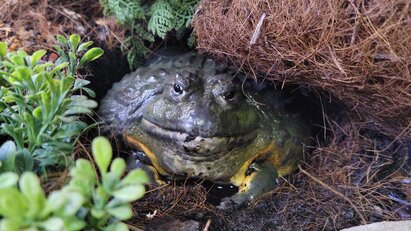 Pixie Frog or African Bullfrog (Pyxicephalus adspersus). Pixie frogs can grow to be 9 inches long! They're the second largest frog in the world! They obviously didn't get the name Pixie from their size, instead it came from their scientific name Pyxicephalus. These frogs like to burrow down into the moist ground near puddles in the open grasslands of Africa. There they sit and wait for their prey to walk by. All of a sudden they stick out their tongue and engulf the unsuspecting prey whole. Pixie frogs will eat anything that fits into their mouth: insects, mice, lizards, birds, even other frogs.