The term lizard refers to a widespread group of reptiles. The difference between a lizard and a snake? Most people would say legs. But there are lizards without legs. The real answer is external ears and eyelids. Lizards have external ears that are not covered by skin. They also have eyelids that they can close voluntarily. Lizards can be as small as a pygmy chameleon and as large as a komodo dragon. Click on their picture to see their biography. 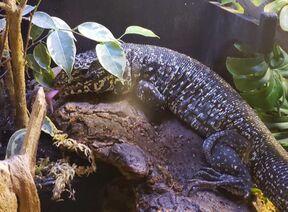 Columbian Black and White Tegu or Gold Tegu (Tupinambis teguixin). These lizards grow up to 3 feet! They live in tropical rainforests in the upper parts of South America. Their tail is as long as their body and they use it for defense. It is very hard and strong and if threatened they will whip it back and forth.
These tegus are carnivores, which means they eat mostly meat. Their meals would include small mammals, lizards, small birds, fish, and insects. Columbian Black and White Tegus are known to be aggressive and avoid human contact when they can. 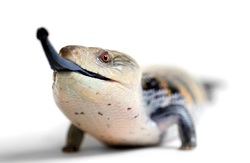 Northern Blue tongue skink (Tiliqua scincoides intermedia). Skinks are a type of lizard that usually have short necks and legs, and long bodies and tails. There are about 800 different species of skinks in the world. Northern Blue tongue skinks are the largest in the skink family and are found in the northern region on the mainland of Australia living in forests, woodlands, and grasslands. They use their brightly colored blue tongue to warn off or startle predators so they don't become lunch. In the wild they eat insects, greens, berries and wildflowers which makes them omnivores. Their favorite thing to eat is snails! 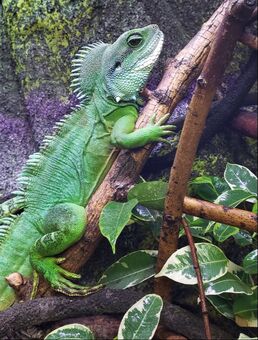 Chinese Water Dragon (Physignathus cocincinus). The water dragon got its name from its behavior of always living near water. If threatened the water dragon will quickly jump off their branch into the body of water below and swim away using their long tail. They can hold their breath for 25 minutes! These amazing lizards can be found in India, China, and southeastern Asia. 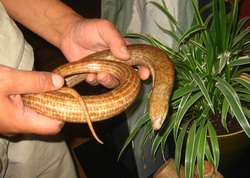 Russian Legless Lizard (Pseudopus apodus). Do you know the real difference between a snake and a lizard?? Nope, not legs!! Lizards have external ears (ear holes) and eyelids. Snakes no not have external ears and they do not have eyelids, instead they have a special clear scale that protects their eyes. Different legless lizard species live in many places around the world and come in different sizes and colors. Russian legless lizards prefer to live in dry grasslands and hunt snails, slugs, worms, and other small invertebrates. They are sometimes referred to as "glass lizards" for their unique adaptation of being able to drop their tail. If a predator grabs onto their tail, it will break off and sometimes break into several pieces appearing as if it shattered like glass. By being able to drop their tail, the lizard can escape while the predator is busy with the pieces of tail left behind.

Savannah Monitor (Varanus exanthematicus). These handsome lizards can be found in sub-Saharan Africa hunting for small prey like millipedes, crickets, and frogs. They are primarily terrestrial, but will occasionally climb trees, and are often found in burrows or lounging on a sun baked rock. Savannah monitors are not endangered, but they are quite popular in the pet trade and upwards of 90% of those captured from the wild die within their first year due to improper care.

Mali Uromastyx (Uromastyx maliensis). This lizard with the unusual name can be found in the deserts of Africa. They have the amazing adaptation of being able to survive without drinking water by secreting salt from their nostrils. They can get all the moisture they require from the food they eat, which is insects and plant material. Their large club-like tail is used to help protect them from predators. When threatened they will whip it back and forth trying to hit the offender and scare them away. 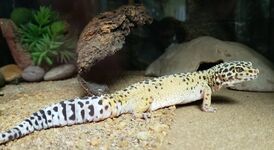 Leopard Gecko (Eublepharis macularius). These stunning lizards are unique little geckos that are found in the highlands of Asia throughout Afghanistan and parts of India. They are unlike other geckos because they lack the special pads on their feet to climb smooth surfaces. Instead, they have sharp griping nails to navigate their dry and rough habitat. They also have movable eyelids which allow them to blink and keep debris out of their eyes. Leopard geckos also have the amazing ability to lose their tail as a defense mechanism if they are in imminent danger from a predator. They can quickly heal, and amazingly they can regrow their tail over the next months to a year. 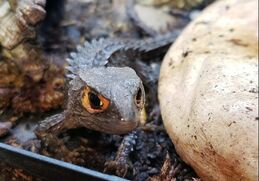 Red Eyed Crocodile Skinks (Tribolonotus gracilis). These skinks are shy, secretive animals. They are endemic to the islands New Guinea and Papua New Guinea.They spend their days buried in the leaf litter on the forest floor only coming out at dusk and dawn. They like to eat crickets, grubs, worms, and any other little insects crawling through the leaves. Red-eyed crocodile skinks also tend to live by water and if they’re startled they can dive into the water and hold their breath.